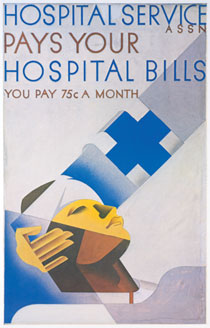 A short history of a major icon

In 1934 a small blue Greek cross appeared for the first time on a poster ordered by E.A. van Steenwyk, head of the Hospital Service Association
in Minnesota, to praise the merits of his hospital care program… at 75 cents a month. Necessity became law, and soon new associations were created in many different regions, each carrying the same unifying symbol, which came to be referred to as the Blue Cross Plan.

In the Quebec of the 1940’s, as was the case in the rest of North America following the Great Depression, many people were deprived of the essentials, and did not have the means to afford medical care. There was no government structure yet in place to guarantee care for the general public. Hospitals were nevertheless obliged to supply services for the sick and the injured who, for the most part, were unable to pay the cost of their hospital stay. This lack of income put hospital care in jeopardy. Where would the money come from?

In 1942 a group of hospital directors and business people founded the Quebec Hospital Service Association to ensure continued service to the public. The goal of the Association was to finance the hospitals by supplying workers with reasonably priced health care services through a prepayment system. It was an immense success. The Blue Cross Plan filled a need that was even more essential when times were tough.


Hospitals were soon able to pay their bills while offering more services to keep pace with both patient needs and health care advances. It was to be the beginning of a long partnership between Quebec Hospital Service Association and the hospitals which became the University Health Centres (UHC). Better known as Blue Cross, the Association laid the foundations of the hospital insurance that became government run in 1961, and to the public health insurance plan introduced in 1969 and overseen by the province.

From forerunner to partner

To respond to the public’s increasing desire to travel, Blue Cross launched its first travel insurance plan in 1977 to cover emergency medical expenses outside of the country. In 1989, it founded its own assistance company, CanAssistance, to help ensured travellers in emergency situations. To act rapidly and effectively, regardless of where the person is, CanAssistance establishes direct service agreements with famous international assistance networks to cover the entire world. These partnerships have stood the test of time and earned Blue Cross and CanAssistance worldwide recognition.

In the last 30 years, the Quebec Hospital Service Association, now called Canassurance Hospital Service Association, has greatly enhanced its insurance programs. Today, Blue Cross health insurance plans go far beyond complementary benefits: they are complete health programs accompanied with exclusive assistance services for daily well-being. Blue Cross travel insurance plans cover not only the health of travelling persons but also their travel investments, and protect them from other risks inherent in travelling outside of Québec.

The goal of Blue Cross insurance products is to provide security to its members. In Canada we are fortunate to have free, universal health care. However, due to a lack of funding for hospitals, citizens are required to assume part of health care costs. Essential services are still available but less accessible due to a shortage of resources resulting in waiting lists.

By providing access to many services in private clinics, Blue Cross health insurance products contribute to freeing up the public network. By filling the gaps in a system that never had and never will have the means to cover all services, Blue Cross contributes to the continuity of a public health care system that no one wants to see disappear.